The Mourne Mountains or Mournes a granite mountain range located in County Down in the south-east of Northern Ireland, are among the most famous mountains in the country. The surrounding area is an area of outstanding natural beauty and is proposed as the first national park in Northern Ireland.

The Mournes are partly owned by the National Trust and see a large number of visitors every year.The highest mountain is Slieve Donard at 849 metres (2,785 ft). The name Mourne is derived from the name of a Gaelic clann or sept called the Múghdorna. The Mournes are visited by many tourists, hillwalkers, cyclists and rock climbers.

The Mourne Wall is among the more famous features in the Mournes. It is a 35 kilometres (22 mi) dry-stone wall that crosses fifteen summits, constructed to define the boundaries of the 36 square kilometres (8,900 acres) area of land purchased by the Belfast Water Commissioners in the late 1800s.

This followed a number of Acts of Parliament allowing the sale, and the establishment of a water supply from the Mournes to the growing industrial city of Belfast. Construction of the Mourne Wall was started in 1904 and was completed in 1922.

It’s all in the name

Some of the mountains have names beginning Slieve, from the Irish word sliabh, meaning mountain. Examples are Slieve Donard, Slieve Lamagan and Slieve Muck. There are also a number of curious names: Pigeon Rock; Buzzard’s Roost; Brandy Pad; the Cock and Hen; Percy Bysshe; the Devil’s Coach Road; and Pollaphuca, which means “hole of the fairies or sprites”. 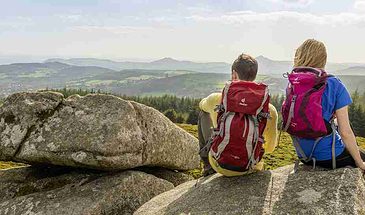